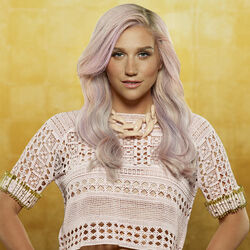 Kesha is an expert on Rising Star. Check out our other wiki, Keshapedia, for more! kesha.wikia.com

On the heels of her smash hits, “Die Young” and “C’Mon,” Kesha recently released “Crazy Kids,” the third single from her sophomore album, Warrior (Kemosabe/RCA Records.) The single is currently available at all digital music providers. Kesha has taken the world by storm since the release of her debut album Animal in 2010. That year, she was declared Billboard's Hot 100 Artist and her smash debut single “TiK ToK” was named Billboard's #1 Hot 100 Song, was the most played song of that year, and was the biggest-selling digital track in the world. Kesha has had eight consecutive Top 10 hits including four #1 singles: “TiK ToK,” “Your Love Is My Drug,” “We R Who We R” and most recently “Timber.” Kesha has more than 30 million Facebook likes, more than 3.5 million Twitter followers, and close to a billion views on YouTube. Between her debut album Animal and her last release Warrior, Kesha has sold over 4 million units worldwide. Kesha has toured the world, playing over 250 live shows in support of Animal and its companion album Cannibal, and an additional 47 shows in support of her latest release, Warrior. She took home the MTV EMA for Best New Act in November 2010 and was nominated for 2 American Music Awards, 4 MTV VMA Awards and 6 Billboard Awards. She has sold over 35 million combined tracks and ringtones in the U.S alone and over 59 million worldwide to date. Kesha is an international powerhouse, Animal has been certified Gold, Platinum or multi-Platinum in 16 markets (including Platinum in the United States and Double Platinum in Australia & Canada) and was the biggest selling debut album from an international female in 2010 in the UK. In the Fall of 2012, Kesha released an illustrated photo journal and scrapbook entitled My Crazy Beautiful Life with Touchstone. The book was a huge fan hit and was a precursor to her wildly successful MTV Show Kesha: My Crazy Beautiful Life which was the #1 series across all TV in the time period with P12-34. In August 2013 Kesha launched her own jewelry line, Kesha Rose by Charles Albert. The line, which is entirely designed by Kesha, is based upon her love of nature and classic rock & roll style.

Retrieved from "https://risingstar.fandom.com/wiki/Kesha?oldid=4747"
Community content is available under CC-BY-SA unless otherwise noted.