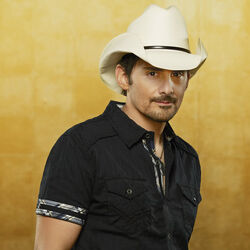 Brad Paisley is an expert on Rising Star.

Brad Paisley is a critically acclaimed singer, songwriter, guitarist and entertainer, which has earned him numerous awards including three GRAMMYs, 14 Academy of Country Music Awards, 14 Country Music Association Awards (including Entertainer of the Year), as well as three awards from ASCAP as Country Music Songwriter/Artist of the Year. He is also a proud member of the Grand Ole Opry, having been inducted in 2001. Since his first #1 single in 1999, Paisley has placed 22 singles at the top of the charts including “Mud on the Tires,” “I’m Gonna- Miss Her,” “Waitin’ On A Woman,” and “Then” among others. His current single, “River Bank,” is from his forthcoming album, Moonshine In The Trunk, to be released on August 26, and second single "Perfect Storm". Paisley’s concert tours draw over a million fans a year and his Country Nation World Tour presented by KRAFT Cheese kicks off May 16 in Philadelphia, PA.

Retrieved from "https://risingstar.fandom.com/wiki/Brad_Paisley?oldid=4745"
Community content is available under CC-BY-SA unless otherwise noted.